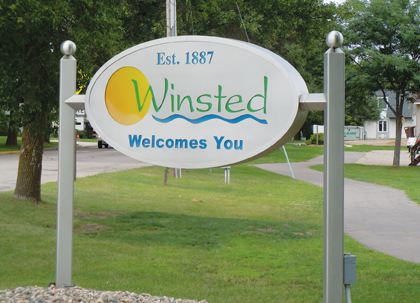 The Luce Line State Trail currently has two severances within in the city
of Winsted. Coming from the east you need to take city streets from
Kingsley Ave to County Rd 1.  It is hoped that a trail will be developed
for this segment in the next couple of years, but in the meantime signage
is planned to help make navigating this route easier.

At County Rd 1, the trail runs parallel to the Winsted airport for about
4,000 feet before the paving starts again to Silver Lake and Hutchinson
for 19 miles.  Due to FAA regulations this segment currently has a turf
surface.  However, the city and the FAA are in the process of developing
updated airport plans and that should be completed by the summer of 2016.
Based on those plans options for the Luce Line, and its paving, will be
identified and plans initiated. In the meantime better signage is planned
and it is hoped that temporary surface improvements will be made in early
2016 that will provide a smoother ride and help delineate the trail
better.

Thank you for your patience and thank you to the DNR for their support in
improving these sections of the trail when the opportunities present
themselves.